What is it about

The ocean gives a lot & receives very little back, so every second season Ocean Expeditions provides a safe working platform for one Antarctic scientist to conduct research free of charge on board ‘Australis’, where the only ‘catch’ is that good Antarctic science must be published for the world to see & help to better understand the ecosystem. The receiver must also have a “go get em” attitude & needs to take full advantage of the opportunity.

Above and beyond all, it is in this spirit of article III. 1c of the Antarctic treaty which states: “[…] Scientific observations and results from Antarctica shall be exchanged and made freely available.” 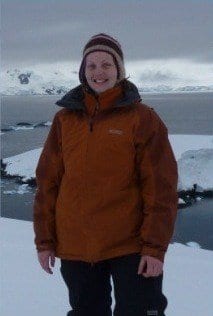 Thank you for all you endless knowledge over the past month.

Marlee is from the Faculty of Science at the School of Biological Earth & Environmental Science – Evolution & Ecology Research Centre (EERC) – Rogers Lab.

Marlee was onboard ‘Australis’ through the November and December season 2011/12, using the boat as a mobile floating science lab, where she successfully recorded a staggering 30 individual male Leopard seal courting calls. The recordings were taken at 15 different locations on the western side of the Antarctic peninsula, however only 10 locations were successful.

Leopard seals have 5 different calls from high pitched cricket like trills to low haunting moans. During the summer the waters of the Antarctic pack ice echo with the calls of the leopard seals singing to one-another underwater. Marlee collected information which will be used to help calculate the density of the Leopard seals in the area by eavesdropping on their singing.

This information will then be related back to environmental characteristics to examine which are the important features that are important to the seals. The first aim of Marlee’s acoustic work was to record the characteristics and structure of the West Antarctic Leopard seal calls.

The second aim was to play back calls from other leopard seals, to see their reaction, if any. To date, playbacks have never been done in the wild with leopard seals before. With an understanding of the seals calling patterns models can be used to turn the number of calls into numbers of seals. But to do this researchers need to be able to calculate various features such as calling rates, ie. how stereotyped are the patterns that the seals produce these calls, and does this calling rate change in the presence of other calling seals (this is why Marlee was doing the playbacks), also, how loud are the calls (measuring their source levels) so we can model how far we would be hearing the calls.

All of the recordings were taken at a depth of around 5 metres using hydrophones and underwater speakers both from ‘Australis’ and the Zodiacs. These recordings and findings will go towards a much larger project examining how the top predators (seals and whales) are responding to the warming on the Western Antarctic Peninsula, by Marlee’s PhD supervisor Tracey Rogers and her team at the Evolution and Ecology Research Centre at the University of NSW. Initial observations found that there are differences in call characteristics between the East and West Antarctic Leopard seals, but this will be examined in more detail now that these recordings have been collected. “What else I can say, if not for your invitation none of these good news would have happened, so thank you again and the time invested.”

The Chilean non-lethal program began in 2000, however, funding was short-lived & the program ended in 2008. Because of this we invited Jorge to continue on with the research under our new fellowship program free of charge, where the only ‘catch’ is that the results must be published for the world to see.

Some of the encounters were a 100% success, recording close up photos of the dorsal fins, then the fluke & finally a good skin sample, thus providing the best possible set of data. (In fact the data was just as good as the Japanese fatal whaling program, which of course ends in the animals death). The Antarctic Minke biopsies are the first for the CEQUA / INACH catalogue & the total biopsies has dramatically increased the overall catalogue. The ship-based Chilean program running over 8 years acquires an average of 10 Humpback biopsy samples per year, showing the scientific value of small yachts as a good scientific working platform.

Jorge’s work on Australis is part of CEQUA / INACH, SORP (Southern Ocean Research Partnership). All of which play a fundamental part in direct action against the Japanese whaling program. Jorge’s findings were vital enough to go all the way to the top & be presented to the 2010 IWC (International Whaling Commission).

All crew have gained vast experience in the ways of the sea.
Contact
EXPEDITIONS
